Secondary mine ventilation has been hamstrung by the availability of fans that satisfy many competing operational factors. The sometimes legislated requirement of adequate volume to the working face, the minimisation of excavation required to fit the selected secondary fan and the power requirements of various operational phases have, in the past, not been satisfied with just one system. The new system being introduced overcomes all these competing requirements in one simple unit with an added bonus of being very durable without loss of performance when wear occurs on the impeller.

Several studies have found that between 42% and 49% of mining energy costs are associated with mine ventilation, depending on the type of mine and the equipment used. If we then look at the general breakdown of installed power of the secondary fan to primary vent fans, the ratio is around 2:1. Thus the total energy costs of the secondary ventilation represent about 25% of the overall mining energy costs. It is of interest to note that the cost of running a typical two-stage axial vs the cost of purchasing and general maintenance cost of the same fan over a 10-year period, the breakdown will be conservatively in the order of 40:1. 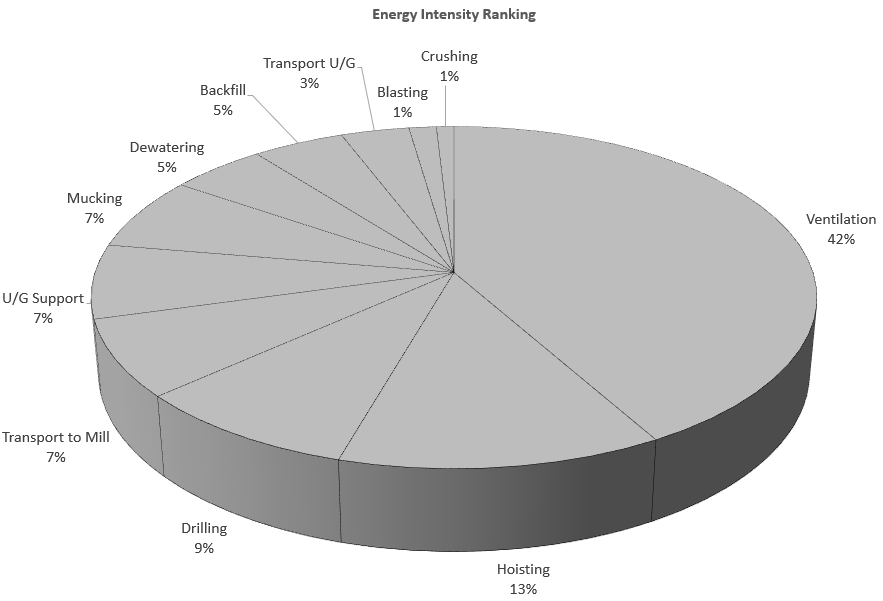 The currently available secondary ventilation axial fan has one duty curve at any given time. Generally, this can be changed manually within the motor power parameters but requires a minor outage and removal of the fan to do the pitch adjustments.

As the bag vent ducts grow longer, the supplied air reduces to a point where inadequate air is supplied to the working face. This is exacerbated by underground equipment putting additional resistance in the heading and further reducing the supplied air at the working face. This shortfall is normally corrected by the installation of an additional fan in the system to overcome losses in the bag system but comes at a cost of production as the heading needs to be shut down to install the second fan. This also means that the heading is supplied with excessive air on the shorter runs with wastage of fan power.

Variable Speed Drives in their various forms increase the range of duties but this is limited and overspeed is usually not possible for a Standard axial impeller. There are many downsides to installing a fan with a Variable Speed Drive, as has been highlighted in a paper3 showing major fatigue issues with varying speeds of the fans. Other issues include that VSDs are generally considered unreliable in underground environments and require cooling whilst maintaining their IP cabinet rating. The heat load of the variable speed drive has also to be accounted for. The other main downside is that altering the speed of an impeller may lead to the excitation of an impeller or blade natural frequency which will result in a very premature failure of the fan.

Commonly underground trucks have a rated flywheel power of greater than 560 kW (751 hp). That combined with a loader power of 350 kW (470 hp) has increased the secondary ventilation requirement. Using the common rule of 0.05 m3/s of air per kilowatt of rated engine power for compliance4, this equates to 45 m3/s (95000 cfm) of air required in an area where a truck is being loaded. To achieve this with a traditional 1400 mm (55”) vane axial fan requires two stages and outlet pressure of lower than 2500 Pa. That is equivalent to having less than 150 m of 1400 mm (55”) standard duct installed on a twin 110 kW (147 hp) fan. This also assumes no holes in the duct. However, in most mines, it is not possible to run 1400 mm duct into an ore drive and therefore it is reduced to 1220 mm (48”). This, combined with leakage, has proven to be a constant problem for the industry.

The High Output Axial fan is designed with the mining industry in mind. Its high-pressure steel fabricated impeller is at the forefront of technology and allows for operation at pressures previously thought impractical for an axial fan. Additionally, prolonged life of the impeller in even the harshest environments is achievable compared with traditional axial fans. 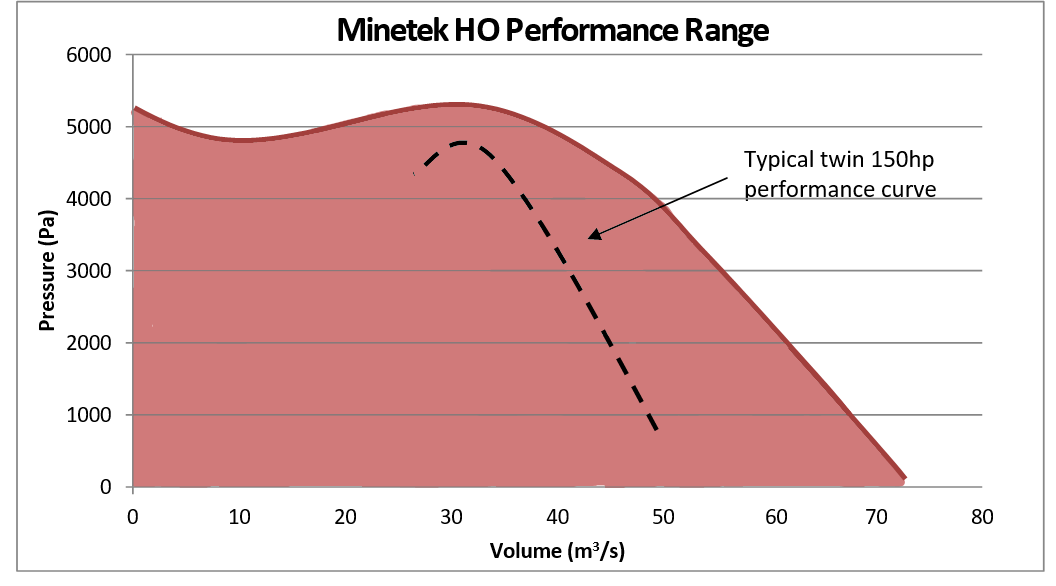 The fan is supplied with a Performance On Demand (POD) system fitted to the inlet of the fan. It allows the fan to be regulated from very low flow requirements right through to more than double the duty point of a traditional vane axial fan.

The POD device offers a new level of control over secondary vent fans that have only previously been partially available with expensive and high-maintenance variable speed drives. The Performance On-Demand system allows the fan operation to be altered if the resistance is changed for any reason. This will ensure all working areas still receive the required airflow. Additionally, the POD can be opened up for blasting and can increase the airflow by up to an additional 30 m3/s, this can result in re-entry times being greatly reduced giving a direct economic impact. The Performance On-Demand controller is regulated on start-up for vent bag inflation, therefore soft starters are not always required. Bump starters are also not required.

After designing the new Minetek patented High Output Axial fan, it was very quickly realised that significant additional benefits could be realised with a level of automation. The thought that a loader operator would stop and change the fan settings, as well as open and close valves, was flawed. Therefore, the Mine Air Control (MAC) system was designed to bring the fan system together with complete automation.

The MAC system consists of a smart controller in each fan starter panel that controls the output at each heading. To achieve this, it receives signals from the flow meters and uses regulators to alter the flow at the face. The whole MAC system is designed to default to a preset flow at any given heading.

The MAC System receives a signal from a tracking system to alert of any machinery entering a heading. However, the default for any active heading is to have a small nominal flow above the amount required for personnel to enter the heading. This ensures its safe and allows machinery to drive straight into the heading. Without this nominal flow, machinery would need to wait at the entry to evacuate any fumes or gas. A simple RFID tracking system can be used or integrate with a pre-existing system.

Looking at the previous costs and introducing a typical timeline for activities in a development heading, the High Output Mine Air Ventilation system will supply over 50 m3/s at 400 m when required but only consume a total of about $118,493 in power per year for the given typical activities for a development heading. Given the average mine total of 15 secondary twin 110 kW fans, the saving in power would be $1,967,505 per year. 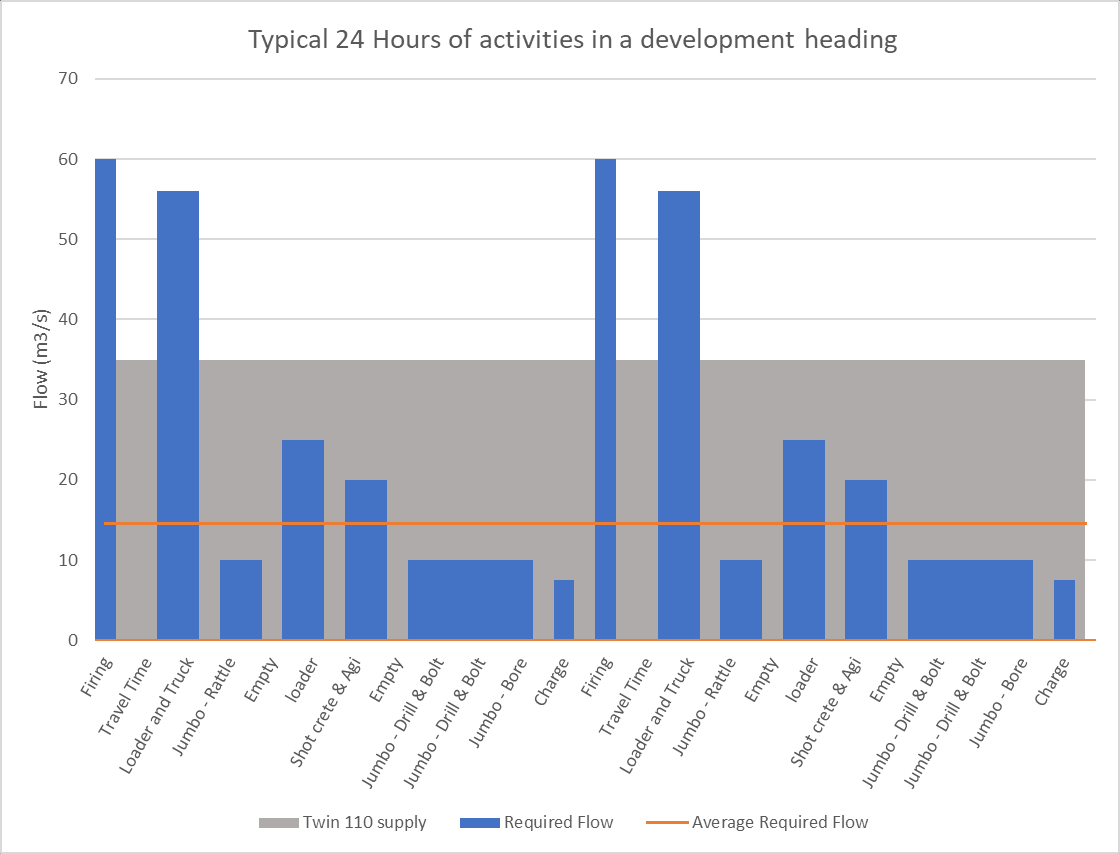 The system is simple when used in declines or single headings. All that is required is a flow meter near the face and controlling the POD to ensure the correct amount of air is delivered for the equipment in the heading.

When we introduce more headings things start getting more complex, with different equipment in different headings and the system pressure increasing and decreasing as the equipment regulates different headings. Using an RFID system, the patented regulation system of all the headings becomes straightforward to manage, as each piece of equipment has an assigned value to it and thus demand is controlled and the fan raises and reduces load based on the real time demand in the mine. 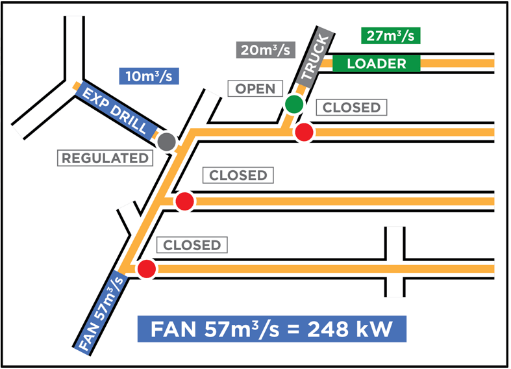 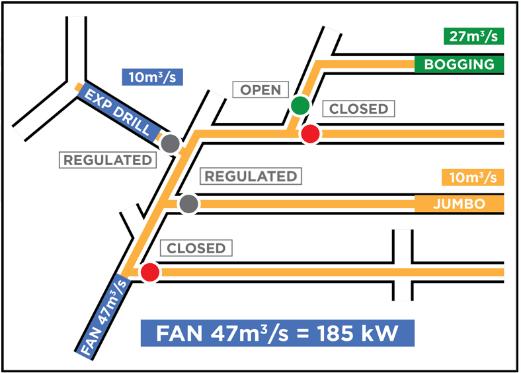 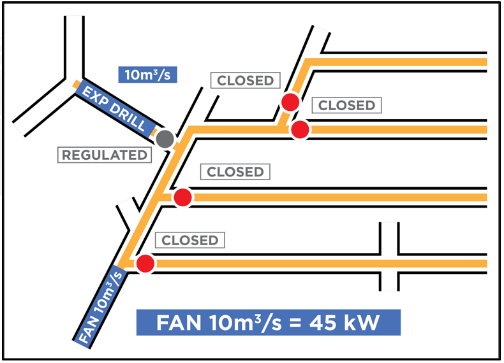 The Minetek High Output Axial Fan have other advantages compared with the market place standard Ø1400mm (55”) twin axial fans. The Minetek fan generates up to 11 dB less noise than a Ø1400 twin 110kW for the same volume flow. The overall diameter of the Minetek fan is slightly smaller than a Ø1400 twin stage axial but is 40% shorter in length and 10% lighter. It is also installed in the same way as all secondary mine vent fans.

Conventional axial fans can suffer greatly from wear on the blades. Just a 1 mm reduction in the blade nose due to wear can have a significant effect on the high-pressure portion of the fan curve. This then translates into a reduced stall point and thus the chance of failure due to stall is increased as the duct lengths get longer. The Minetek High Output Axial is not affected by wear on the blades and will perform to original duty points without adjustment 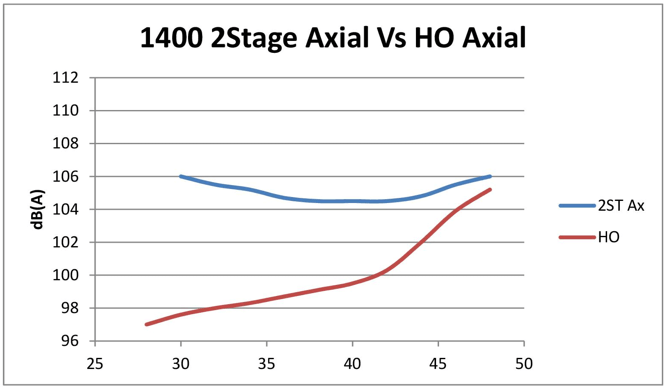